It’s not exactly news that fruit and vegetables are good for you, and back in the spring some research was published saying that rather than five portions a day, we should be aiming for ten. Which is a lot for most people! So is it actually possible for a busy Mum, with work, outings and a busy life, to feed a toddler ten portions of fruit and veg a day? I decided to find out! 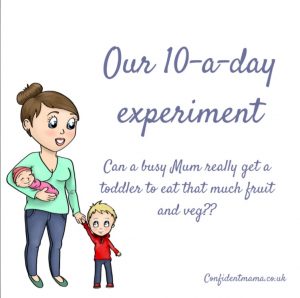 First of all I did a bit of research into what counts as a portion, here were my rules:

I also wanted the experiment to be as true to life as possible so I didn’t do a meal plan for the ten portions or spend any longer than usual cooking. I also wanted to avoid buying lots of fresh food that would end up being wasted, or spending a fortune on exciting imported foods if I didn’t have to.

I hadn’t done the shopping yet, so we didn’t have any fruit with breakfast, but we headed straight for the shops first thing and made the most of the free fruit that Tesco give out to children. My boy loves to munch an apple while we shop! We picked up loads of different fruits, feeling very lucky that it’s summer and things like strawberries are in season. Then we went to the freezer section for a few bags of veg.

Back at home I made him a picnic lunch to eat in the garden while I did some weeding, it’s the only way I can do any gardening! He had cucumber sticks, cherry tomatoes, strawberries, grapes, bread and butter and some cold turkey.

Half way through the afternoon he was hungry so he had another apple (which doesn’t count since he had already had one), then a banana. By this point I was starting to wonder how he could really be that hungry but I made him his tea, fishcakes with broccoli, cauliflower, carrot and peas (from a bag of mixed veg, I counted it as three portions) followed by raspberries and yoghurt. He ate the lot!

This was a day at work, so all three meals were packed up in his lunch box the night before. They were:

Breakfast: Weetabix and a banana

He also had a snack at playgroup, consisting of cucumber sticks, peach slices and pineapple.

A day at home, with a swimming lesson in the morning. I completely forgot to have any fruit at breakfast time but hopefully we can make up for it later on! He’s usually really hungry when we get in from swimming so if I can I like to get his lunch ready before we go, that way I can give it to him the moment we get home. Today he had cucumber, tomatoes, red and yellow pepper, kiwi, strawberries, edamame beans and oatcakes with cheese, followed by a yogurt.

Tea was leftovers from our meal last night, a casserole with carrots and broccoli. I added some peas and sweetcorn too, and he had a choice of an apple or a banana for pudding.

I was actually really surprised by how easy it is to offer ten portions a day, if you have a range of options available to choose from. Lunch for us is always finger foods and he is very used to things like raw veg sticks so it’s very easy to include a nice selection. Cooked meals were slightly harder, I have a habit of including one or two vegetables so I had to think harder to include more. Frozen veg was really useful there, being able to add a handful of this or that easily and without wasting the rest of the packet made a big difference. As always, a portion for a toddler is smaller than most people think so it helped to offer just a portion each of lots of different things, rather than an extra big portion of one thing!

Would you like help planning meals, and including lots of fruit and veg? I have lots of options for you, check them out here.

Of course serving up foods doesn’t mean your toddler will eat them! If you have a fussy eater, these tips might help.