Time and time again I’ve heard people advising someone to fake an allergy. Perhaps a child hates tomatoes and Mum is worried that school will upset him by trying to make him eat them, perhaps it’s a slimmer who is embarrassed to ask for low fat food in a restaurant, or an adult who doesn’t want to come across as a fussy eater. Sometimes an organisation can’t cater for preferences when mass catering but the diner really hates onions. Whatever the situation, one suggestion that always comes up is “just say you have an allergy, that way they have to cater for you.” Great idea, isn’t it! No embarrassment, you get the food you want, no harm done. Except it does do harm. 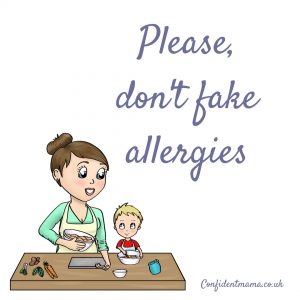 The first problem is that when you say you have an allergy a café or restaurant should go to fairly extreme lengths to avoid cross contamination. It’s not just a case of leaving off that item, they might have to go so far as to close down part of the kitchen and use that area exclusively to prepare your food. It’s a big hassle and puts lots of pressure on the staff. So when they see you just try a taste of someone else’s food (and they do see) it really annoys them. Imagine going to all that trouble day after day and then watching people eat the thing they said they couldn’t have, wouldn’t you become a bit jaded? Maybe start to take a bit less care? That could be a big problem for the person who comes after you and really does have an allergy.

The second issue is that a cook or chef might make a genuine error, which is bad enough in itself, but when that mistake is never noticed they don’t know to correct it. They might use the product hundreds of times so it becomes automatic, a go-to solution. They teach it to other members of staff and recommend it to colleagues. So the mistake spreads and since “nobody has ever had a problem” it becomes ingrained and difficult to change. When something is common you stop paying attention, you stop double checking the way you would if it was rare. That’s just human nature.

A few weeks ago we had appointments in two different hospitals and ate while we were there. Caterers in both hospitals thought a sunflower spread was dairy free just because it wasn’t pure butter, both were very surprised to be questioned further and astonished when it turned out that the “dairy free” spread actually did contain dairy. You have to wonder how many times they had used that spread in sandwiches, cakes, mashed potato and crumbles. How many people had they assured it was dairy free and never reported a problem? You can understand why the mistake was now so embedded in the system that I was considered very strange for questioning it, after all dozens of people “with allergies” had eaten that food and been fine.

Please, help to protect those people who have genuine allergies. It doesn’t seem like much, and your one order probably wont do any harm all by itself, but the effect over many years can be huge. Some restaurants have got tired of watching customers eat food they said they were allergic too and now refuse to cater for different diets at all. Some schools have been so inundated with fake allergies that they now don’t provide special food without hospital documentation, which can be difficult and expensive for parents to get. Some people have tragically died after eating food they thought was allergy free.

Just say “No anchovies please”, “could I have it without the sauce?” or “Sophie doesn’t like tomatoes, please don’t try to make her eat them as I don’t want meals to be upsetting for her.” Honesty it’s easy, doesn’t have to be embarrassing and could make a big difference for someone one day.